Is the land of literature changing as rapidly as some say or are there just more avenues to travel down it?

Certainly, there have been many changes. No longer are we limited to books printed on paper that can be placed on a library shelf (although that is still my preference). All sorts of digital resources are also now available and as I travel frequently, I am a big fan of my e-reader.

The possibility that literature would totally disappear never occurred to me so on 9/13/2014, I was interested to read “2114: A Library Project” in the International New York Times.

This is an excerpt of the article:

The hope that creative work survives its creator is usually empty. Shakespeare boasted that his sonnets would outlast monuments and the memory of princes, and they have. But it’s rare for an artist to keep audiences interested over generations. … Even the list of Nobel laureates in literature is filled with now-unfamiliar names.

Yet a Scottish artist, Katie Paterson, has found a clever way around this humbling problem. “A forest has been planted in Norway,” Ms. Paterson explains on the Future Library site, “which will supply paper for a special anthology of books to be printed in one hundred years’ time. Between now and then, one writer every year will contribute a text, with the writings held in trust, unpublished, until 2114.”

…Ms. Paterson has already chosen a time capsule for this unusual experiment: The Deichmanske public library in Oslo. And she already has her first contributor: the Canadian author Margaret Atwood, who is known for her speculative fiction.

… The project coordinators seem to have thought of everything, going so far as to equip the Deichmanske library with a printing press. If humanity loses the ability to print books, that’s covered. Of course, if humanity should lose the ability to read, that’s another story.

The author of this article poses the possibility that humanity could lose the ability to print books or even to read at all.

Reproduction of Gutenberg-era Press on display at Printing History Museum in Lyon, France. 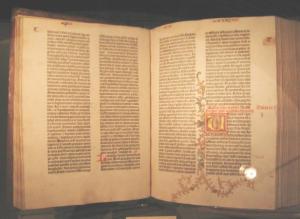 The Gutenberg Bible was the first mass produced printed work.

I believe there is no such possibility. Although many have tried unsuccessfully to destroy it, one book will last forever.

The grass withers, the flower fades, but the word of our God stands forever (Isaiah 40:8). Heaven and earth will pass away, but My words will by no means pass away (Matthew 24:35).