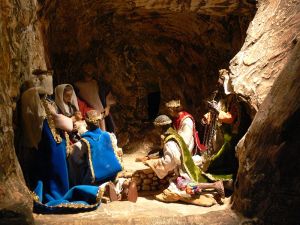 When unpacking my Christmas decorations, I love pulling out and setting up my collection of nativity scenes. It is the picture of the real Christmas story: the gift of the Son of God to the world.

Jesus is the central figure in the nativity scene. It would not mean anything without Him. When I am placing the other figures around Him, I usually place Mary behind His right and Joseph behind Him on the left.

The placing of Joseph in the nativity scene is somewhat symbolic of his life. He is the man in the background. Many stories have been written about how Mary was chosen to be the mother of our Savior, but little has been said about the man who was chosen by God to raise His son.

Matthew tells us more about Joseph than anyone else. Like me, I think Matthew must have been impressed with this humble man who loved God, loved the mother of His Son and loved His Son in a way that no one else could.

After Mary told him she had been chosen to bear the Christ child, Joseph had the first of his dreams that included instructions from God. The angel in the dream told Joseph not to be afraid but to wed Mary as he had planned.

Joseph was visited by an angel of the Lord in his dreams at least twice more. After the visit of the wise men, he was instructed in a dream to take his family to Egypt because Herod wanted to kill the child. He was told to stay until he was visited again. After Herod died, an angel of the Lord appeared to Joseph in a dream and told him to go to the land of Israel. Joseph settled in the city called Nazareth, thus fulfilling the prophecy about Jesus that He would be a Nazarene.

Joseph is mentioned again when he and Mary found Jesus conversing with the teachers in the temple. When Mary questioned Jesus as to why He had not come with them when they left the city, Jesus said, “Why did you seek Me? Did you not know that I must be about My Father’s business?” (Luke 2:49). This is the last time Joseph is mentioned, so he must have died between the time Jesus was twelve and the beginning of His ministry.

Although Jesus’ brothers resented Him and for a long time did not believe in Him, that was not true of Joseph. He did not resent raising a Son that was not his own. He accepted that assignment from God without question.

Joseph was an unusual man, humble and obedient. What Jesus learned about carpentry, he learned from Joseph. Joseph must have also taught Jesus much about His Father’s word as well, for we know that Jesus learned the Scripture as a child.

I am looking forward to meeting Joseph in heaven, the man in the background in the nativity.

Then Joseph, being aroused from sleep, did as the angel of the Lord commanded him and took to him his wife, and did not know her till she had brought forth her firstborn Son. And he called His name Jesus. (Matthew 1:24-25).