I wrote this reflection at 6 AM on a Saturday morning. My husband and I had just returned from a mission trip arriving at our home a little less than five hours before- 1 AM. My mind was filled with the people and events from the trip, but I had to admit – I was tired from the journey.

No matter where we go, it seems our journeys are long and hard. There is often a “hurry up and wait” factor involved. We seldom have a direct flight to our destination. Travel often entails a mad run through the airport to make a connecting flight. Sometimes even getting to the airport seems a little uncertain. We are often in a place where we don’t speak the language and others have to make arrangements for us. 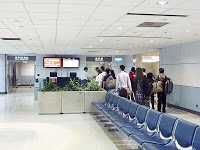 Traveling often takes up a great deal of time when we go to conduct international conferences. Many times there are journeys with our journey. Each day we might travel from one city to another, sometimes several hours apart. I wondered aloud to a ministry partner as to why traveling is so tiring. We are often sitting in a car or a train. Why is sitting so tiring?

When I reflect on the fact that I get weary from travel, the circumstances in which our friends live, in some of the countries we serve, make me realize that I have it easy. I am able to make advance arrangements and plan for the trip. Often they don’t know how they are going to get somewhere until the last minute. They may have to catch a ride. If one is not available, they may have to ride a bus – a very crowded old bus with no air conditioning, no shock absorbers and not enough seats for every passenger.

Life is hard for my friends. Transportation, as well as everything else, is very difficult. Some walk or ride bicycles for miles in order to get to conferences we teach. In every case, I know they must be weary from their journeys, but they never complain. They smile and say that’s just the way it is.

Often we need translators. Once, when we had our young translator traveling with us, I asked him if he had rested well the night before and he said he was rested even though he had only slept two hours. He said the Lord was able to make two hours seem like the eight he really needed. He insisted he had more than enough energy to do the work required for the day.

Jesus could certainly identify with the challenges of travel. When He lived among us, with few exceptions, He walked everywhere. He must have felt the stones on the path through His sandals. He must have had to stop many times and shake out the dust and small rocks. He felt the heat of the day as He traveled. He got tired.

Like my friends, although Jesus got weary from travel, He did not complain. He moved on. He had a job to do.

Once Jesus got weary from His journey and sat down at a well to rest while His disciples went into town to find food. His tiredness led to a divine appointment arranged by His Father. While resting, He revealed Himself to a woman at that well – possibly the first woman who met Him face to face and heard Him declare that He was the Messiah.

When His disciples returned with food, they found Him refreshed – not by physical food or by water to drink (although His thirst started the discourse with the woman). She was more important to Him than His exhaustion or His thirst. The encounter that began because Jesus was so tired He needed to stop and rest led to her salvation and many others in her town.

He had to travel through Samaria…Jesus, worn out from His journey, sat down at the well…A woman of Samaria came to draw water…Then the woman left her water jar, went into town and told the men, “Come, see a man who told me everything I ever did. Could this be the Messiah?

In the meantime, the disciples kept urging Him to eat. But He said, “I have food to eat that you don’t know about…My food is to do the will of Him who sent Me and to finish His work” (John 4 HCSB).

Follow One Focus Ministries on WordPress.com
Join 442 other followers