I enjoy collecting antiques and have several pieces. They were made so well many years ago that they have stood the test of time. Antique furniture was often made by hand. Now most furniture is mass produced by machines. In the past, only hard sturdy woods were used for furniture. A great deal of modern furniture consists mainly of pressed wood or particle board which doesn’t stand up to moisture or major usage. You can often see these pieces of furniture in front of homes awaiting pickup for transport to the city dump. 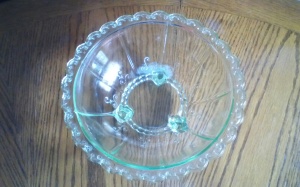 Vintage glass, especially that which was produced just before, during and for a few years after the Great Depression are of special delight to me. Although not the finest glass, they are beautiful.

Prior to the Great Depression, there were over one hundred manufacturers of colored glass. After the Great Depression ended there were less than half that number. Although bankruptcy closed many of these companies, fire was a prominent reason for shutdown. If the company was destroyed by fire, the owners could not afford to rebuild.

During the lean years, much of this glassware

was distributed free as promotional pieces – placed in oatmeal, cereal or soap boxes or given away at the theater or gas stations.

During the Great Depression, companies made production of each piece last as long as possible. I have some pieces of red depression glass, which is ordinarily a deep ruby color, which are practically orange or opaque because they were cast at the end of the dye lot. The company was stretching production by producing as many pieces as possible before they had to add new dye.

Antique furniture and Depression Glass are becoming scarce. Rarity of the pieces have resulted in a spike in prices. Some people have paid thousands of dollars for the rarest pieces of Depression Glass. In order to stock antique furniture, buyers often go to old farms where they might find a piece stored in fragments or even left out in the elements. The experts know how to put them back together but it takes a concerted effort to bring them back to their former glory.

Those who work on and collect vintage merchandise will only do so if they believe it is worth it. They believe there is value in the vintage piece itself.

Unfortunately, society’s values have gone the way of antique furniture and Depression Glass. Personal standards of behavior have changed dramatically. One’s principles and judgments of what is important in life is much different in the twenty first century than it has been in the past – especially in America.

A society’s values are reflected in their practices in the workplace, involvement in their churches and community and the entertainment they enjoy. The traditional values of America can now be placed in the vintage category – mainly because those values were based on biblical standards.

It is worth the effort, however, to do what we can to restore America to the values it once held. Biblical standards have stood the test of time because they were given to God’s people by God – who never changes.

…in the last days… men will be lovers of self, lovers of money, boastful, arrogant, revilers, disobedient to parents, ungrateful, unholy, unloving, irreconcilable, malicious gossips, without self control, brutal, haters of good, treacherous, reckless, conceited, lovers of pleasure rather than lovers of God…You, however, continue in the things you have learned…the sacred writings which are able to give you the wisdom that leads to salvation through faith which is in Christ Jesus. All Scripture is inspired by God and profitable for teaching, for reproof, for correction, for training in righteousness; so that the man of God may be adequate, equipped for every good work (2 Timothy 3:1-4, 14-17).

Follow One Focus Ministries on WordPress.com
Join 442 other followers