A date like this one (11/11/11) doesn’t come along too often. Not only do we observe Veteran’s Day on the 11th of November, but it was at the 11th hour of the 11th day of the 11th month of 1918 when the Armistice was signed between the Allied nations and Germany to officially end World War 1. Formerly known as Armistice Day or Remembrance Day, this day is a national holiday in many allied nations, honoring the members of the armed forces who lost their lives in the war.

Rightly so, Veterans Day now pays tribute to all military veterans. Those who have served in the military or are presently serving in the military deserve our thanks. Many nations have reason to thank their servicemen for their contributions, but this reflection is based on those in the branches of the U.S. military.

Thank you, sons, family and friends who have served and are serving in the United States military. I owe you a debt of gratitude for the freedoms I still have. 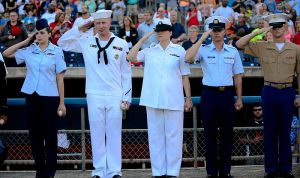 Greater love has no one than this, than to lay down one’s life for his friends (John 15:13).

← Forgetting the Cross
Christmas is coming →