Psychologists and researchers have discovered an interesting fact about Olympic medal winners. Gold medal winners are obviously thrilled. However, the reactions of the remaining medalists are a surprise. 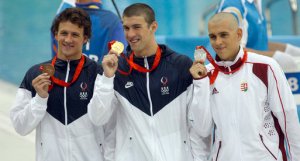 Silver medal winners are sometimes ashamed and disappointed. Instead of being proud that they have accomplished the incredible feat of being better than everyone else in the world with one exception, they feel they came up short. It appears that because their goal was the gold medal, winning the silver is a let down.

On the other hand, bronze medal winners are often very excited, expressing through comments and facial expressions a sense of accomplishment. At the 2012 London Olympics, American Brendan Hansen, the winner of the bronze medal for the 100 meter men’s breaststroke finals, said, “It worked out, you know. It’s just awesome that I get to go on the podium tonight. Honestly, I’m really proud of myself… This is the shiniest bronze medal that you will ever see. Ever!”

All the medal winners accomplished something remarkable; however, their level of satisfaction has to do with their comparison with others. The gold medal winners reached their goal, becoming the best in their field. Silver winners may or may not be happy, depending on how they compared themselves to others or even the gold medal winner. Bronze medal winners have reason to be proud. They are part of a trio who came out on top.

Although gold, silver and bronze medals are awarded to the three top performers in any given sport represented in the Olympics, this is a modern development. The ancient Olympic games gave only one prize – an olive wreath – to the best performer.

As a child of God, I am confident there is no second or third place for any of us. The crown of righteousness the apostle Paul described to Timothy is awarded to every true believer in Christ. We are all first place winners because Christ, our substitute, has won the victory for us.

In Heaven, there will be no disappointment of having placed second in life or surprise that we even made it to the podium. Any shame that we might have for not measuring up has been covered by the blood of Jesus. Any pride that we might have of our own accomplishments is put into proper perspective because we are all sinners and need redemption.

We will not be comparing ourselves to each other for we all receive the prize obtained by our Lord Jesus Christ. All of the energy we need to run the race He has provided through His Spirit, who lives and works within us. The victory He has won over sin and death has been shared with us.

I am looking to the day when I will come face to face with Him to personally thank Him. I will not be standing on the podium. He will. Like the twenty-four elders, I will lay my crown at His feet and worship Him.

I press on toward the goal for the prize of the upward call of God in Christ Jesus (Ephesians 3:14 NAS). Do you not know that those who run in a race all run, but only one receives the prize? Run in such a way that you may win. Everyone who competes in the games exercises self-control in all things. They then do it to receive a perishable wreath, but we an imperishable (1 Corinthians 9:24-25).