Driving down a Texas country road is an interesting experience. You can pass large manicured ranches, trailer homes that have seen better days, old barns that must have been beautiful at one time, oil rigs, hay bales, and much more. The terrain is often occupied by livestock – horses, sheep, deer or cattle. 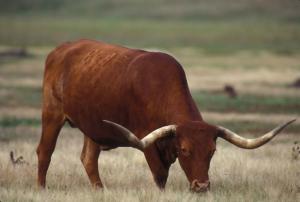 On one such drive, I observed a Texas longhorn – a very large Texas longhorn – that had forced his head through a fence in order to eat the grass on the other side. Whether he had done this before or not, I don’t know, but I wondered how he was going to get his head back through the fence once he was through with his snack. It certainly must have been easier to put his head through the fence than it would be to back it up again.

I guess I will never know his trick as we didn’t wait until he was through to see how he did it. I knew if he had problems, I wouldn’t be able to help him. I am not comfortable around a large steer and could possibly get injured in the process. It would have taken someone who knew how to handle such an animal to assist him if he needed help.

People are a lot like that Texas longhorn. We often don’t think of the consequence when we see something we want. It appears to be there for the taking. The grass seems greener on the other side.

Like that Texas steer, reaching out to take what we want may lead to complications. Once the decision is made, we may discover that it was not good for us after all. It is possible to get stuck in the fence, having to call on others to help us, possibly causing injury in the process. That’s exactly how sin began. Can’t you imagine that Adam and Eve wished they had left that forbidden fruit alone? On their own, they could not get back to the place where they had been before they sinned. They lost their place in the Garden.

God knew how to restore His relationship with man. He sent His Son, who was injured and died in the process of helping us, to bring us back where we need to be – safe and secure on God’s side.

When the woman saw that the tree was good for food, and that it was a delight to the eyes, and that the tree was desirable to make one wise, she took from its fruit and ate, and she also gave it to her husband…and he ate…Then the Lord God said, “Behold, the man has become like one of Us, knowing good and evil; and now, he might stretch out his hand, and take also from the tree of life and live forever” – therefore the Lord God sent him our from the Garden of Eden (Genesis 3:6, 22-23). Then he showed me a river of the water of life…On either side of the river was the tree of life…There will no longer be any curse (Revelation 22:1-2).