Since the passing of my father, my husband’s grandmother and his parents, I have discovered a lot of things about them through their writing: their notes, their cards written to each other, notations made on pictures and newspaper clippings as well as longer writings, such as wills and books.

My father wrote a book in his late 80’s on eschatology and was working on another book. He kept many notebooks of his Bible lessons and had scores of notes in the Bibles he left behind. Tears came to my eyes as I read his note on the bottom of one of my letters: “my blessing from the Lord.” At my request, he prepared a notebook of his World War II experiences. Dad and I had a great relationship. It is richer still because of his writings. 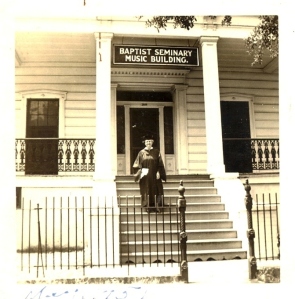 My husband’s grandmother wrote a manuscript which I had yet to read, but am looking forward to it. It was found among pictures and cards in her footlocker after her son passed away. She was the most dedicated Christian witness I have ever known. Her last will and testament revealed that focus in her life. She had few material possessions. She specified that everything she had was to be divided equally between her sons after five hundred dollars (a significant sum for her) was given to the World Literature Crusade “for giving the gospel of the Lord Jesus Christ to one million people each day.” Then, after her signature on her handwritten will, she stated, “May they and all my relatives meet me in Heaven.”

These discoveries sealed my conviction that what you write down will reveal a lot to your loved ones. I attended a writer’s conference a few years back and still have stamped in my memory a comment by one of the leaders. Asked by a participant if he kept a diary, he said, “I have not always kept a diary, but I do now. After my wife died, I discovered a diary I didn’t know she had. I discovered things about her I didn’t know before and would not give anything for that diary.”

God operates by that principle. What He said in His word many years ago reveals who He is. It is truly a treasure of knowledge about the One who loves us so much that He gave His Son for our salvation. I am thrilled to have His words in print as well as the writings of the loved ones He put in my life.

But these are written so that you may believe Jesus is the Messiah, the Son of God, and by believing you may have life in His name (John 20:31). But the word of the Lord lasts forever. Now this word is the good news that was announced by you (1 Peter 1:25 HCSB).

← Resolutions You Have Kept
Things and People →