I love my home state of Texas. It is a land of plenty with an amazing array of beautiful landscapes and a large variety of wildlife. That includes snakes – lots of them. I do not love snakes.

In the years I have lived in Texas, I have encountered all four major poisonous varieties of snakes indigenous to our state: rattlesnakes, coral snakes, copperheads and water moccasins.

When our sons were young, we lived in a city that was also home to all four of these snakes. Within a block of our home was a lake. One of the largest water moccasins I have ever seen was found in front of our house. He was dead by the time I discovered him. He had been run over by a car.

While I was mowing one day, I encountered a coral snake in our back yard. Both the snake and our dog were headed for the shaded area underneath our deck. Before our pet saw him, I was able to kill the snake by running over it several times with the lawn mower.

Our sons were taught by their Boy Scout leader to watch for beds of rattlesnakes in the woods behind our house. I warned them to never pick up a stick without checking to make sure it was not a snake. I didn’t take my own advice. I was cleaning around the base of a tree one day and the stick I was about to pick up moved. Thankfully, I had a hoe in my hand and was able to kill the baby rattlesnake.

We no longer live in that city and my sons are grown now with children of their own, but they must continue to heed my warning about snakes. In the area where we live now, I am still finding snakes. I found a dead one by a wood stack in our back yard. We are also clearing a piece of land outside of town and I have encountered two copperheads there. Both were hidden underneath a pile of leaves I was raking. 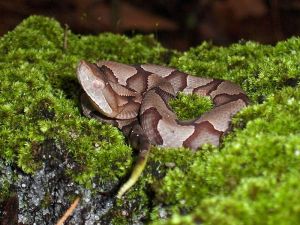 I had been working the better part of the day and was close to quitting when I saw the first one. It was motionless but very much alive. I had my wits about me enough to say a prayer. “Lord, do I leave it and go home or should I kill it?” Immediately, I heard Him say,  “If you leave him, he will be here when you get back.” I didn’t want to see him again, so I killed him with the shovel I had close by. Several days later, I uncovered the other one and didn’t have to ask that time. I killed him too.

I have wondered about the way the Lord answered my question. Instead of saying, “leave him,” or “kill him,” He said, “If you leave him, he will be here when you get back.”

I believe it is like that with sin in our lives. We shouldn’t just ignore temptations and walk away – imagining they will not continue to hang around. We must be just as diligent to get rid of sin as soon as it rears its ugly head as I was with those snakes.

In each case, when I encountered a snake, God had provided a tool for me to use to kill it. He has given us the sword of the Spirit, which is His word, to confront temptation and sin. Just as Jesus responded to Satan with the Word of God when He was tempted in the wilderness, so should we.

John Owen, who wrote a little book called Mortification of Sin in Believers (based on Romans 8:13), put it this way: “Be killing sin or it will be killing you.”

for if you are living according to the flesh, you must die; but if by the Spirit you are putting to death the deeds of the body, you will live (Romans 8:13).

← Our Father Knows Best
When Construction is Done →