In 2002 Peter Biehl and Francois Bertenes excavated a circular enclosure outside of Goseck, Germany. Now believed to have been there for seven thousand years, it was revealed in a 1991 aerial photograph of a wheat field in that east German location. When Biehl and Bertenes combined GPS data with the archaeological evidence from the site, they discovered the two southern gates of the henge marked the summer and winter solstice, thus possibly making it the world’s oldest solar observatory.

I’m not sure how accurate the dating may be of the Goseck Circle, but one thing is clear. As long as mankind has lived on earth, he has been fascinated with time. Ancient calendars – using lunar and solar measurements – have been discovered around the world.
Sundials, indicating the time of day by the position of the sun, must be aligned with the axis of the earth’s rotation to tell the correct time. There are several types of sundials, but in the horizontal sundial, the style (that part which casts a shadow) must point toward true celestial north. 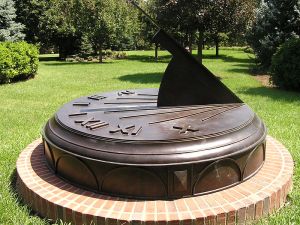 Our lives revolve around time. Each year is marked by birthdays. Children divide their years into school time and vacation time. Working adults mark their calendars for retirement. Productivity is measured by how much we can squeeze into each hour of the day. Periods of refreshment come when we have a minute to ourselves. On and on it goes. Every minute counts.

As a Christian, I know that God has given us the gift of time and expects us to use it for His glory. Our true north is His purpose and will for our lives. The psalmist declared, Yours is the day, Yours also is the night; You have prepared the light and the sun. You have established all the boundaries of the earth; You have made summer and winter (Psalm 74:16-71).

Stewardship of our time is as important – or even more important – than what we do with the monetary resources He gives us.

Live life, then, with a due sense of responsibility, not as men who do not know the meaning and purpose of life but as those who do. Make the best use of your time, despite all the difficulties of these days (Ephesians 5:15-16 Phillips Translation of the New Testament).

← The Balancing Act
The Safe Room →