I travel to many countries where electricity is undependable.

In one country, for instance, it is so unreliable that even the hotel rooms are without power for several hours during the day. The hotels may have generators but they won’t run them very often because of the expense. When my husband and I stayed in a hotel for two weeks, I couldn’t understand why it went dark every afternoon. I finally learned from a shop proprietor (not from someone in the hotel) that this was deliberate. They were trying to save electricity!

Not only was it inconvenient, but the power was actually tied to our hot water source as well. My husband was speaking every evening and wanted to take a shower before leaving for the conference, but there was never any hot water. Finally I complained and a hotel attendant appeared at the door with a bucket of hot water! That’s what they expected him to use to bathe with. That situation never got fixed. We had to learn to live with it.

In another country, lights turned off and on periodically. That’s when our host laughed and said, “Electricity is regularly irregular here.” As we toured through the city, he showed us power lines leading into apartment buildings. They were not only a mangled mess, but he said that the tenants were expert at learning whose line was whose and theft of someone else’s electricity was common.

Even in well developed countries like America, an ice storm, tornado or hurricane can wr 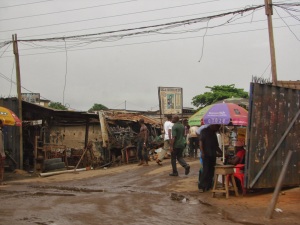 eck havoc with the power grid. I have had food spoil in a refrigerator and had to light candles to see at night during such storms.

Thankfully, what I know I can depend on is God’s power. His Holy Spirit is never weakened by inadequate power or theft. What He requires us to do He will provide the power to accomplish it. Praise Him and His wonderful power source!

But you shall receive power when the Holy Spirit has come upon you; and you shall be witnesses to Me in Jerusalem, and in all Judea and Samaria, and to the end of the earth (Acts 1:8). … and what is the exceeding greatness of His power toward us who believe, according to the working of His mighty power… (Ephesians 1:19).

← The War Is Over
Sisters by Choice →