Recently we lost a huge oak tree on our property. A thunderstorm with high winds toppled it. Flooding caused other damage but our greatest loss was this big oak tree.

My biggest surprise in examining the tree that fell was that there seemed to be no root system. That is quite concerning because from all appearances that tree seemed to be just as healthy as the other large oaks surrounding it. It was only after it fell I discovered the roots were not strong enough to keep that mighty oak from falling during a storm.

What happened to my tree was similar to what happened to the houses Jesus described in Matthew 7. There were two men and two houses in that story. When a storm came with great winds, rain and floods, one house stood and another fell down. The difference was the foundation. One house was built on a rock and stood firm against the wind, floods and rain. The other, because i 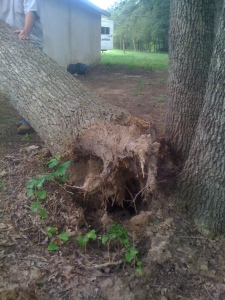 t was constructed on sand, fell. Jesus said, “Great was its fall.”

On the outside, it might have appeared that both these houses were the same. It was the foundation – or in the case of my oak tree, the root – that was the problem.

The stability of the house that survived the storm and the inability of the other to stand was determined by decisions made by their owners. The house built on the rock was built by a wise man who knew the value of time invested to construct a solid foundation. A foolish man built his house on sand- so eager to get it built that he gave no thought to the need for a firm foundation. The possibility of a storm completely destroying his home either never crossed his mind or he decided to take the risk. Either way, he was wrong.

Our spiritual lives are like that. Our strength comes from the Spirit of the Lord – a firm foundation. Those rooted and grounded in His love will be able to withstand the storms of life. Those who are not will fall.

… strengthened with might through His Spirit in the inner man, that Christ may dwell in your hearts through faith; that you, being rooted and grounded in love, that you may be able to comprehend with all the saints what is the width and length and depth and height – to know the love of God which passes knowledge; that you may be filled with all the fullness of God (Ephesians 3:17-19).