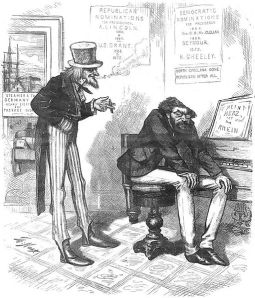 Uncle Sam, cigar in hand, stands speaking to a sullen Carl Schurz sitting at a square piano though turned away from the keyboard. The sheet music on the piano is entitled “Mein Herz ist am Rhein.” Source Harper’s Weekly, August 24, 1872. Caption: CARL IS “DISGUSTED WITH AMERICAN POLITICS.” — Frankfort Gazette. Uncle Sam. Look here, Stranger, there is no Law in this Country to Compel you to Stay.

Americans would like to believe that democracy works –  our voice and votes count, our elected officials have our best interest in mind, listen to their constituents and work tirelessly for the good of the nation. And yet, it’s becoming hard to trust anyone in politics. Even those who start out wanting to make a difference may wind up more than just discouraged with the process. After being in office for a short time, they often take on the same attitude of the politicians they defeated in their election. They give up on the changes they said they were going to make. They will do anything just to get elected again.

I do know of politicians who are determined to keep their head about them and not let that happen. To those few, I say “thanks.”

Although there have been times when I have asked myself, “what is wrong with this picture?”, I still vote and am grateful for the privilege of doing so.

In a democracy, people get the kind of government they deserve.

The American people are today a deeply divided people — on ideology, politics, faith, morality, race, culture. Americans today — and not for the first time — do not really like each other.

Americans have no one to blame but ourselves. Our problem is really a sin problem. We are divided in politics because we are divided on the basic trust issues of life. A democracy would only work if people cared for one another.

Thankfully, I am part of a government that is truly trustworthy. It is not a democracy. It is a kingdom and Jesus is in charge.

As King of Kings, He does not need to listen to us, but He does. He not only has our best interest in mind; He left the comforts of heaven to work on our behalf. He speaks for us when we can’t speak for ourselves. He never gave in to the temptation to be popular. He followed through on His mission. What He accomplished resulted in a kingdom where everyone will care about one another because they are part of His family. I am truly grateful to be part of that government – now and for eternity.

For unto us a Child is born, unto us a Son is given; and the government will be upon His shoulder. And His name will be called Wonderful, Counselor, Mighty God, Everlasting Father, Prince of Peace (Isaiah 9:6).