Traveling exposes me to an interesting array of circumstances. Whatever mode of transportation I use I observe human nature at work. Watching crowds operate – and being a part of those crowds – is an educational experience.

Most of the time I board an airplane using a jetway from the waiting area in the airport. As a frequent flyer, I may be one of the first people to enter the airplane although I am often one of the last to disembark because I purchase tickets in economy and my seat is usually located in the back of the airplane.

At other times boarding requires riding a bus out to where the airplane is parked on the tarmac. People often line up early in order to get on the bus first, but I have noticed something interesting when that happens. Airport personnel require those who enter first to go all the way to the back of the bus in order to make room for the others who are boarding. The scurry to be first on often results in being last off.

Matthew 19:30 and Mark 10:31 record the same situation. In response to Peter’s statement that His disciples had left everything to follow Him, the Lord tells Peter His true disciples will have reward in heaven. He then said, “But many who are first will be last, and the last, first.” I get the feeling He is telling Peter many people will be surprised. 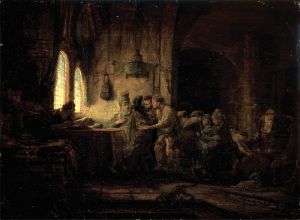 Rembrandt Parable of the Laborers in the Vineyard

In Matthew 20, Jesus, as He often did, was telling His disciples what the kingdom of heaven was like. A landowner needed laborers for his vineyard. Early in the morning he hired some agreeing to pay them a denarius for the day’s work. He hired more at the third, sixth, ninth and even the eleventh hour. At the end of the day, he paid each one a denarius, no matter how long they had worked. When the ones who had been hired first, and had worked all day long, grumbled at the generosity of the landowner, he replied, “Is it not lawful for me to do what I wish with what is my own? Or is your eye envious because I am generous? So the last shall be first, and the first last.”

When all is said and done, we may be in for a few surprises. Our way of accounting and God’s way are not the same. He knows who has tried to push and shove his way into heaven with a false belief that he deserves to be there. He also knows who is truly grateful for His generosity, painfully aware that without His love and grace we would not be able to enter at all.